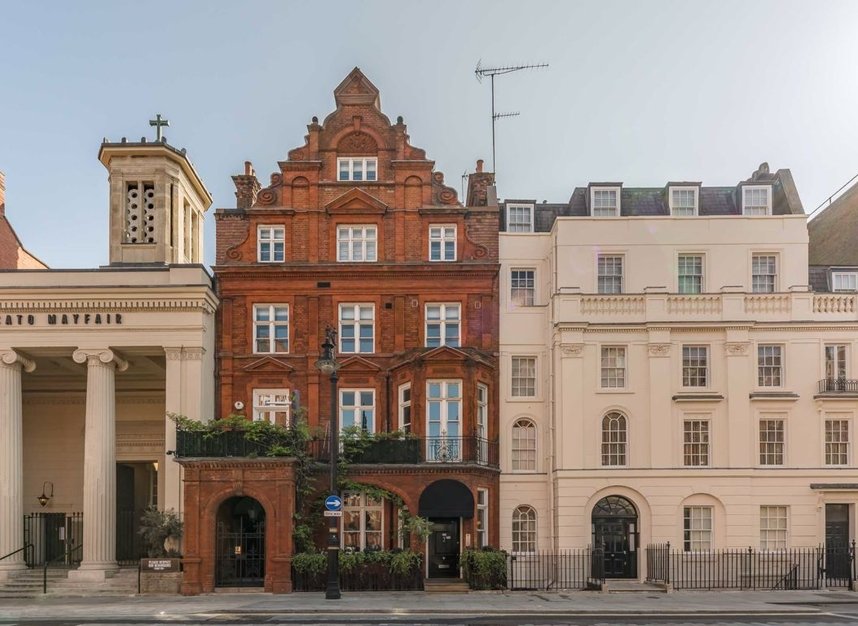 Mayfair’s former vicarage at 13A North Audley Street, a grand red-brick townhouse, has been converted into stylish apartments and a trio are available to let via Wetherell. These range from a one-bedroom to a split-level four-bedroom penthouse. Neighbouring the Grade I Listed parish church of St Mark’s, this Mayfair vicarage is no cosy cottage but a grand nineteenth-century mansion. Guests for tea have included Dwight Eisenhower and Eleanor Roosevelt, where the spread was so legendary that it was said to rival Claridge’s and believed to have inspired the catch-phrase ‘more tea vicar!’.

The handsome gabled building was designed by Sir Arthur Blomfield, one of the last great Victorian pioneers of Gothic revivalism, and finished in 1887 coinciding with Queen Victoria’s Golden Jubilee. His emulation of European architecture helped to create a distinctive ‘Dutch’ style which helps number 13A to stand out from its white stucco neighbours. St Mark’s was deconsecrated in 1974 and has recently become Mercato Metropolitano, whose commitment to restoring its period features has combined with the opening of a sustainable market for artisanal produce and centre for the local community.

Prior to 1974 St Mark’s served as the parish church for Mayfair’s aristocratic residents and their staff. Its proximity to the American embassy meant that it was heavily used by General Eisenhower and visitors from Washington during the Second World War, to an extent where it was popularly known as ‘the American church.’ Many of these transatlantic visitors would then be enticed next door for afternoon tea, granting the church and vicarage a prestige which also attracted British figures as well-known as Clementine Churchill and the Duke of Westminster.

Their host also played a distinguished part in the wartime effort. The Reverend Kenneth Thorneycroft was appointed in 1938 and was a modernising influence from the start, setting up a recording studio in the crypt from which he would broadcast during the most difficult months of the war. Throughout the Blitz Thorneycroft would frequently say night prayers to locals in the Oxford Street basement that served as their makeshift shelter, and as many were Jewish refugees he joined with a rabbi in joint services.

The vicarage building has an equally interesting history. The architect Blomfield was a specialist in modelling churches and, having completed his architectural training, set up his own practice specialising in the fashionable Anglo-Dutch style.

One of his assistants was a certain Thomas Hardy, later author of ‘Far from the Madding Crowd’ and other famous works.

The first vicar to live there was the aged philanthropist Reverend Ayre, followed by Robert Hadden, a champion of East London’s poor who wrote ‘An East End Chronicle’ in 1880 to draw attention to the area. “To by far the large majority of dwellers in the world of London,” he commented, “the East-end of the great city is still an unknown land.” Despite his radical politics Hadden’s profile was such that he was appointed Chaplain in Ordinary to Queen Victoria in 1900 and when he died prematurely in 1907 Edward Elgar composed his famous Elegy in his honour.

Hadden’s successor Herbert Cronshaw presided over the parish during the Great War and the deaths of many sons of his aristocratic flock. He was followed by Geoffrey Pennyman, Thorneycroft’s predecessor, who was confronted with the reality of social change as the great houses lost their staff and the vast space of number 13 began to decay. The reverend’s solution was to convert half the house into flats, thus creating number 13A. The Vicarage and St Mark’s church were both severely damaged by bombing and rocket attacks during the Blitz, though fortunately Thorneycroft and his wife escaped harm and were able to move back in to the repaired vicarage. He left in 1962, causing the second floor to be converted into two more flats as the congregation dwindled.

Flat 1 at number 13A pushes the limits of what can be expected from a one-bedroom apartment. The front door opens to a spacious living room featuring a beautiful Chesterfield sofa which converts into a double bed and a large flat screen TV. Turning right leads to the kitchen, fully fitted with all mod cons, and a dining room capable of seating four guests and even equipped with a wine cooler. The main bedroom is dominated by a king-sized bed and features a second flat screen TV. The impressive ensuite is a self-contained bath house, featuring separate shower, bath, steam room and underfloor heating.

Stylishly-decorated Flat 3 is situated on the second floor and includes three ensuite double bedrooms. Besides the steam room it possesses all the same features as Flat 1, though it offers a larger kitchen, dining area and living room as well as breathtaking views down North Audley Street and over Mayfair.

The split-level penthouse, Flat 4, is large enough to occupy the top two floors of the building, and offers four deluxe bedrooms with marble ensuites and a private terrace.

Fully furnished and benefiting from the former vicarage’s high vaulted ceilings, this chic and timeless living space also includes a working gas fireplace and underfloor heating. The spacious terrace is decorated with stylish outdoor furniture and is a perfect spot for al-fresco dining, though an indoor dining table with wine cooler and space for eight offers an alternative when the English weather becomes an obstacle.

Peter Wetherell, Chief Executive of Wetherell says: “This is a great opportunity to live in this beautiful historic building of ‘more tea vicar’ fame. Residents at number 13A can enjoy inhabiting the grandest vicarage in London as well as the stylish modern living provided by these luxury apartments, reflecting the needs of the younger demographic currently seeking to move into Mayfair.”

Mayfair is most famous as the most expensive property in the original 1930s edition of Monopoly, and it is still one of, if not the most, desirable and exclusive postcodes in the world. The Grosvenor family - Dukes of Westminster since 1874 - made one of the most fruitful investments in history when they bought the unused Mayfair land in 1677 and its development facilitated their rise to become ‘the wealthiest family in Europe’ by 1900. The post-war decline of the upper classes led to increased commercial development in the area and as a result St Mark’s lost most of its parishioners and ceased to practice as a church. Since the 1990s Wetherell have helped to attract residential buyers to Mayfair again from all over the world and the area is regaining its sense of community.

Bond Street and Marble Arch Underground stations are just 300 metres away with access to the Central and Jubilee Lines.