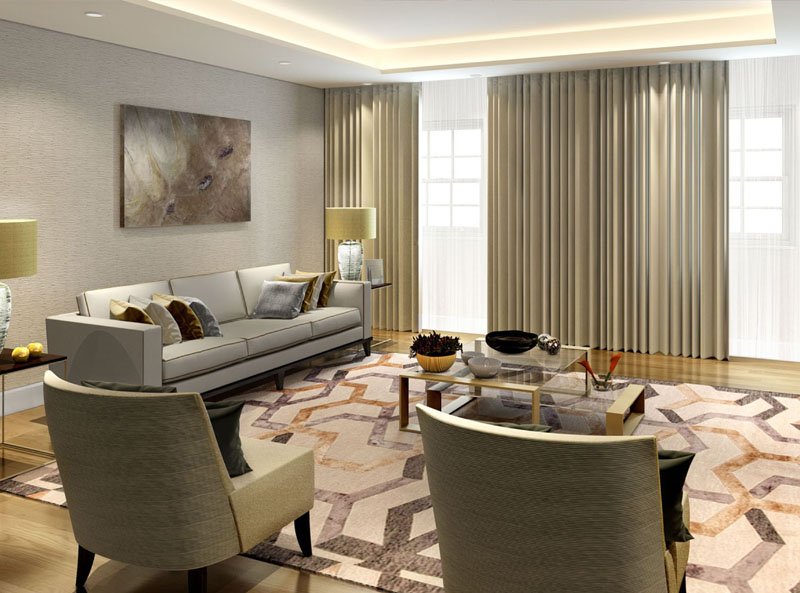 An elegant 8,019 sqft Georgian townhouse at 28 Bolton Street in London’s Mayfair, formerly the UK headquarters of RCA Records of Elvis Presley, David Bowie and Diana Ross fame, is for sale providing the opportunity for conversion into a multi-unit residential development providing either four larger apartments or 11 studio suites: for sale via Wetherell.

On 16th June 2016 the building was provided with planning permission to convert back to residential use with a rear extension and refurbishment allowing for the creation of two three-bedroom, one two-bedroom and a one-bedroom apartment. Subject to planning, the building could also be converted to provide a premium build-to-rent scheme offering 11 studio-suites with proposed new build behind a retained façade and roof extension.

During the 1970s and early 1980s RCA Records was led by General Manager Robert Sarnoff and Creative Director Kurt Brokaw with the office at 28 Bolton Street responsible for organising the UK and continental European advertising and promotional activities for RCA artists who released an album or single. The offices organised for the artists advertising in magazines, radio, billboards and press conferences to brief the media about European and world tours.

The offices at 28 Bolton Street helped to organise the UK and European press conferences and promotions for the Ziggy Stardust World Tour of 1973, Elvis Presley’s tours of 1974 and 1975, the Diana Ross European tour of 1976 and Bowie’s World Tour of 1978.

During the Diana Ross European tour in 1976 Diana Ross arrived in London on 6th March and stayed at Mayfair’s Inn on the Park Hotel just around the corner from 28 Bolton Street and when Elvis Presley died in 1977 the RCA offices at 28 Bolton Street were besieged by the world’s media wanting to know how Presley had died. RCA Records is now part of Sony Music with the label linked to artists including Little Mix, Paloma Faith, Justin Timberlake, Beyonce and Olly Murs.

28 Bolton Street has also had a colourful history as a grand Mayfair home. The townhouse was originally built in 1699 and one of the early occupants was William Douglas (1724-1810), the 4th Duke of Queensbury, who in 1799 was the eighth-wealthiest man in Britain, with a £1 million fortune which is equivalent to over £100 million now.

The Duke of Queensbury developed a strong passion for Frances Pelham, the daughter of former Prime Minister Henry Pelham. Frances lived with her father on Piccadilly and such was the Duke’s obsession with her that although he owned 28 Bolton Street in 1752 he purchased a house at 138-139 Piccadilly in order to live next door to Frances and had a bow window built so that he could sit and spy on her. When Frances rejected his advances the Duke returned to Bolton Street.

Between 1862 to 1920 28 Bolton Street became the London home of the Colborne-Higgins family, the wealthy brewery dynasty, led by George Higgins (1817-1883) and later Cecil Charles Colborne-Higgins (1856-1941), who owned the vast Higgins & Sons Brewery in Bedford.

Since 1920 the townhouse has been in commercial use, first as solicitors offices, then during the 1970s and 1980s at the home of RCA Records, and most recently as multi-let serviced offices.

Peter Wetherell, Founder & Chairman of Wetherell says: “it is rare in Mayfair to have the opportunity to purchase the freehold of an entire townhouse in such a good location. A developer or build-to-rent operator could remodel the property into a multi-unit apartment scheme making 28 Bolton Street then perfect for either rental income or sale. The local South Mayfair district is undergoing significant repositioning with several prominent development schemes including The Clarges Estate and 60 Curzon Street helping to revitalise the area.”

Running from Curzon Street to Piccadilly Bolton Street is located in the heart of South Mayfair just a few minutes walk from The Ritz Hotel, Green Park and Buckingham Palace.