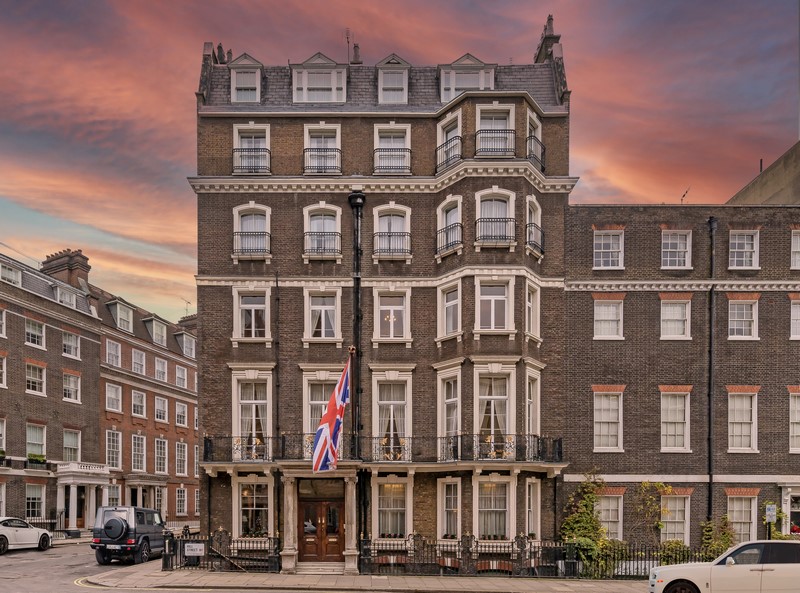 The largest mansion building currently for sale in London’s Mayfair, a palatial Grade II listed property at 38 Hill Street, providing 17,131 sq.ft. (1,591.5 sq.m) of accommodation including grand state rooms, formerly the home of the Pitt family of Prime Ministerial fame, and since 1946 the home of The Naval Club, provides an opportunity for future use as a single mansion, multi-unit residential development, 5-star hotel or Embassy building: the freehold for sale exclusively via joint sole agents Wetherell and Gerald Eve.

The grand Georgian building at 38 Hill Street was originally built in 1748-49, designed by architect Benjamin Timbrell, under the auspices of local landowner Lord Berkeley.

One of the early occupants was John Pitt, 2nd Earl of Chatham (1756-1835), the First Lord of the Admiralty and brother of William Pitt the Younger, who served as Prime Minister between 1793-1801 and 1804-1806. As the London home of the Pitt family 38 Hill Street hosted political figures, Royalty and senior Naval staff and in the 1800s the building was enlarged at the rear to allow for grand entertaining.

In the late 1890s the property was purchased by E G “Isaac” Raphael, the head of an affluent family who had made a fortune from finance, publishing and property including the building of Raphael Street in Knightsbridge. In 1905 Raphael commissioned William Flockhart, architect to the Edwardian super-rich, to refurbish 38 Hill Street including a dark stock brick exterior with canted bay,  Portland stone entrance porch, elegant entrance hall with circular staircase and a vast first floor Louis XVI style drawing room.

The mansion remained in private ownership until World War II, when it was requisitioned for use as a London headquarters by the Auxiliary Territorial Service, as the women’s arm of the British Army was then known.

As early as 1943 the Royal Naval Volunteer Reserve (RNVR) Officers serving in nearby Whitehall had an aspiration to keep in touch when the war was over and have a private member’s club where active and reserve Naval officers could socialise.

So in 1946, with the help of the Astor family, the freehold of 38 Hill Street was purchased from the Raphael family and it has been the home of the RNVR and The Naval Club ever since. Notable members of The Naval Club have included Viscount Astor, Lord Louis Mountbatten, 1st Earl Mountbatten of Burma, and Harold Watkinson, 1st Viscount Watkinson with guests including HM The Queen, HRH The Duke of Edinburgh and HRH The Prince of Wales. It is believed that during the 1950s members of ‘The Thursday Club’, portrayed in The Crown Netflix TV series as Prince Philip’s weekly escape from Royal life, socialised at The Naval Club.

Now the freehold of 38 Hill Street is for sale providing an opportunity for future luxurious residential, hotel or hospitality use with accommodation over basement, ground and four upper floors. As a single mansion 38 Hill Street could be configured to provide over the basement level a professional kitchen, staff quarters, wine vaults, home cinema and a health and leisure complex with swimming pool, gymnasium and spa. The ground and first floors would provide entrance hall, grand staircase and five main reception rooms, including the vast first floor Louis XVI style drawing room, with up to 16 bedrooms on the upper floors. There could also be a courtyard garden terrace reinstated to the rear façade and a roof garden on the top sixth floor.

As a 5-star boutique hotel 38 Hill Street could provide up to 30 keys, including bedrooms and suites, alongside concierge reception, lounges, cocktail bar, fine dining and entertaining rooms on the ground and first floors with a gymnasium and back-of-house facilities on the basement level. Other alternative future uses of 38 Hill Street could include a multi-unit residential development, an Embassy or Ambassador’s residence, a private member’s club or headquarters for a corporation or Private Family office.

Peter Wetherell, Founder & Chairman of Wetherell says: “it is extremely rare in Mayfair to have the opportunity to purchase the freehold of an entire mansion building of this size which is still configured as a vast single property. I know The Naval Club exceptionally well as I attended The Nautical College Pangbourne and served as an RNVR so 38 Hill Street is somewhere I have socialised and stayed many times. The principal rooms in 38 Hill Street are magnificent and only Dudley House on Park Lane and Ancaster House in Chesterfield Gardens rival in terms of grandeur. If remodelled into a super-prime mansion 38 Hill Street would be one of the most valuable, largest and prestigious private homes in Mayfair.”

Lloyd Davies, Partner, Gerald Eve, says: “Located on a wide and deep plot, 38 Hill Street is an extremely large property which lends itself to a range of potential commercial or hospitality uses. It is a rare opportunity to secure one of the finest freeholds in Mayfair.”

Peter Wetherell, Founder & Chairman of Wetherell says: “The sale of 38 Hill Street is part of the ongoing residential renaissance of Mayfair which has taken place over the last decade. There have been a series of grand mansions, which were used after World War 2 as commercial buildings, which have now been turned back into palatial private homes. Dudley House on Park Lane, served as offices, and is now a private palace, Aberconway House was used the HQ of the Rank Group, Wetherell sold this and it has been turned back into a private home. Likewise Lombard House on Curzon Street, was bank headquarters, I sold the building, and it is now a private mansion. Most recently three adjoining townhouses on Mount Street, which were being used as offices, have now been turned back into three private homes.”

Peter continues: “The billionaire buyer is likely to be a family person, with an art collection and a portfolio of beautiful homes around the world. In my opinion the top five countries where the buyer could originate in rank order are Qatar, India, Britain, America or China, or if not Qatar then one of the other Gulf states such as the UAE or Saudi Arabia. It was always said that at the height of the British Empire the world was run from the mansions of Mayfair, now the people who run the world all own a palatial home in Mayfair, the district has become the London address of choice for the super-rich who run and own the world.”

Peter adds: “The other possibility in my view is a Government buying 38 Hill Street for use as an Ambassador’s Residence or Embassy. The building has a consented flag pole, so a state would be legally able to fly their flag from the building, and Hill Street is the widest avenue in inner Mayfair, so a country owning the property as an Embassy would be very high profile.”