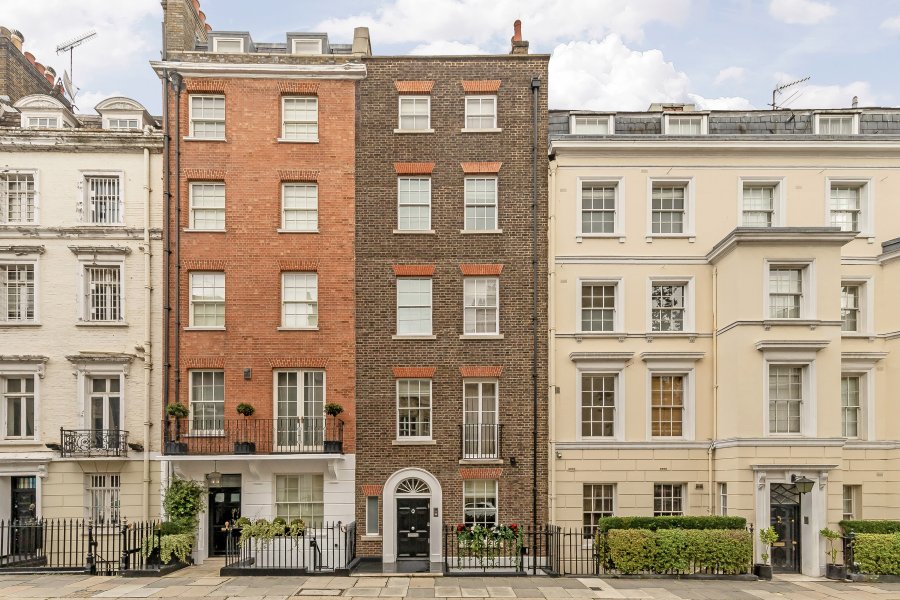 Between 1928 to 1933, the townhouse on Chesterfield Hill (at that time the address was known as John Street) was leased by Fred Astaire (1899-1987) and his sister Adele (1896-1981), who were at the height of their Transatlantic theatre careers, with the property serving as their luxurious London pied-à-terre whilst they were working at theatres in London’s West End. The Mayfair townhouse was used by the siblings to entertain their high society friends who included Royalty, aristocrats and celebrities.

Kathleen Riley’s biography The Astaires: Fred & Adele (2012) tells the glamorous story of how during the 1920s and early 1930s Fred Astaire and his sister Adele entranced theatre audiences in New York and London with their incandescent performances in a string of smash-hit musicals, each performed on New York’s Broadway and then brought to a major theatre in London’s West End.

On their early visits to London the Astaires took a suite at the Grosvenor House Hotel on Park Lane but as their success grew, and their residency in the UK increased, from 1923 they leased a penthouse flat at No.41 Park Lane. They lived at the penthouse on Park Lane when they performed ‘Stop Flirting’ at the Shaftsbury Theatre and later ‘Lady be Good’ in 1924 at the Empire Theatre in the West End.

2/ From 1925 onwards the Astaires were earning $5,000 (£3,935) per week – a fortune at the time – and so in 1928 when they came to live in London to perform a long season (263 performances) of ‘Funny Face’ at the Prince’s Theatre Adele Astaire took a lease on the townhouse at Chesterfield Hill and Fred Astaire purchased a new Rolls Royce Phantom motorcar which he would proudly park outside the townhouse.

At the townhouse on Chesterfield Hill the Astaires entertained friends who included Prince Aly Khan, Winston Churchill and Noel Coward, the latter introduced the Astaires to Edward, Prince of Wales, and his brother, Prince George, Duke of Glocester. At the townhouse the Astaires would tap-dance in the first floor drawing room and down the sweeping staircase to entertain guests. It was regular houseguest Prince Aly Khan who introduced Adele to Lord Charles Cavendish, the second son of the 9th Duke of Devonshire.

When they stayed in London Fred Astaire would frequent Savile Row tailor Anderson & Sheppard who created his famous wardrobe of elegant clothes, and the Astaires would dine at Mayfair’s Claridges and Grosvenor House hotels. Their next 1930s shows in London were Smiles (1930) and The Band Wagon (1931-32).

In 1932 Adele proposed marriage to Lord Charles Cavendish and at the end of the season of The Band Wagon she announced her retirement from the stage. On May 9th 1932 Adele married Lord Charles Cavendish, receiving the courtesy title of Lady Charles Cavendish, and the couple moved to Lismore Castle in Ireland. Fred Astaire ended the lease on Chesterfield Hill and returned to the United States (his Mayfair Rolls Royce was also shipped to Manhattan) and in New York he began his new show in 1934, The Gay Divorcee, starring his new dance partner Ginger Rogers.

Whilst the Astaire’s “John Street mansion” was famous during the late 1920s, today the townhouse’s history is little known since John Street was damaged during the Blitz and the surviving houses were renumbered and the street renamed as Chesterfield Hill in 1940.

Fast forward to the modern day and the Astaire’s elegant Chesterfield Hill townhouse has been meticulously modernized and refurbished behind the restored, original façade. The townhouse features the finest hand crafted materials, custom made lighting and bespoke joinery. It provides luxurious living and entertaining space over seven levels, arranged over lower ground, ground and five upper floors.

The ground floor entrance hall leads into the 10-seater dining room, where the Astaire’s once entertained Noel Coward and Prince Aly Khan, which has a feature stone fireplace and statement parquet flooring. The dining room leads into the elegant open plan family kitchen, which has a central island, Gaggenau appiiances, Quartz stone worktops and sleek cream units, with French doors leading onto the patio garden.

The grand first floor drawing room, where the Astaires taught guests to tap-dance, opens onto a large outside roof terrace, and this floor is complete with a spacious home office/library.

The principal bedroom suite, one used by Adele Astaire, occupies the entire second floor of the townhouse and is lined with built-in wardrobes and leads into the main bathroom. Occupying the entire floor above is a matching principal guest suite, once Fred Astaire’s domain, with a spacious bedroom and adjoining bathroom. There are three further bedrooms (two ensuite) on the uppermost floors.

Peter Wetherell, Founder & Chairman of Wetherell says: “This expansive Mayfair residence was the 1920s and 1930s London home of Hollywood legends Fred and Adele Astaire where guests have included Noel Coward, Prince Aly Khan and Winston Churchill. It has had a luxurious makeover and Wetherell believe that it is one of the most interesting and special property opportunities in Mayfair at present.”