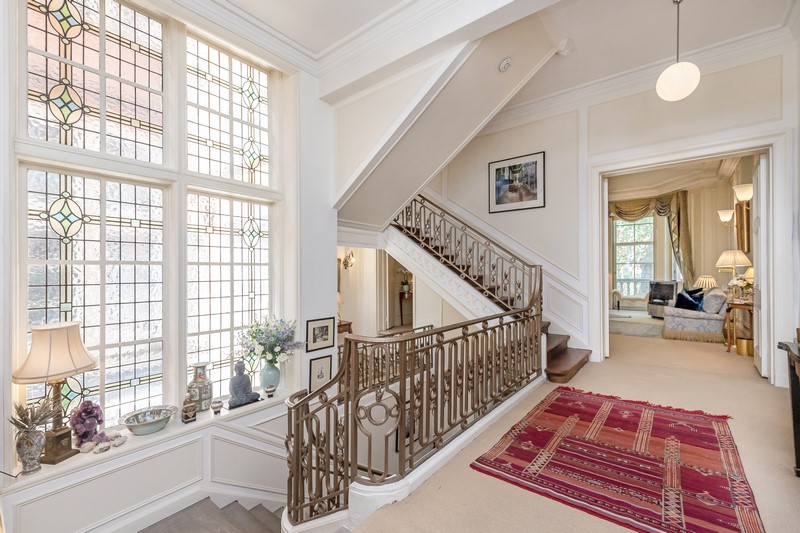 The magnificent Blue-plaqued Mayfair townhouse on South Street of Lord Ashfield, the founder of London Underground, where he helped to plan the capital’s subterranean defence during the 1940 blitz bombing, including transforming Down Street Tube Station into a bunker for Winston Churchill and his War Cabinet, is for sale via sole agent Wetherell: the first time it has been on the market in twenty years.

The Grade II listed six-storey 6,477 sq. ft townhouse overlooking Mount Street Gardens was built by J.J Stevenson in Queen Anne revival style, between 1896 and 1898, and retains many of its original features. It provides an impressive family home with its six sumptuous bedrooms and a lavish space for entertaining with ceiling heights of 3.5 metres in the formal reception rooms. Two rear balconies offer magnificent views over Mount Street Gardens, which pre-date the house by nine years and house a variety of exotic plants including a Canary Island date palm and three dawn redwood from China.

Between 1918 and 1940 the South Street house served as the London home of Lord Ashfield, the celebrated First Chairman of London Transport and founder of London Underground. The plaque commemorating Lord Ashfield (1874-1948) was erected in 1984.

Born in Derbyshire in 1874 Ashfield, or Albert Stanley as he was then, emigrated to Detroit with his family in 1880. Leaving school at just fourteen allowed him to play a part in the infrastructure boom taking place in the US, and he rose to become General Superintendent of the Detroit Street Railways Company at the age of just twenty.

His successful career in America was noticed across the Atlantic and as a result he was appointed as Managing Director of the Underground Electric Railways Company of London in 1907, where he was an instant success, launching the Bakerloo line and standardising all of London transport under one organisation in 1930.

Arguably Ashfield’s finest hour and his most important work came in 1939 and 1940 when he was asked by Neville Chamberlain and later Winston Churchill to help transform sections of the underground network into bunkers and escape routes for the Cabinet and Royal family, some of which remains classified to the present day. So sensitive was this work, that the bunker plans were kept under lock-and-key in safes and were only reviewed at No.10 Downing Street and Ashfield’s home in Mayfair.

In early 1939 Ashfield held a series of top secret meetings at No.10 Downing Street and his South Street home and it was agreed with Prime Minister Neville Chamberlain that the disused Mayfair underground station at Down Street (closed since 1932) would be turned into a top-secret underground bunker for the Prime Minister and cabinet.

Ashfield personally oversaw the conversion work, walking from his home on South Street to inspect the building of the PM’s secret bunker. The platform faces were bricked up and the enclosed platform areas were reinforced with concrete and beams and divided up into an “underground 10 Downing Street” with offices, meeting rooms and dormitories.

The complex was ready in late 1939 and it was used by Chamberlain and later Winston Churchill, and had the codename “The Barn”, eventually becoming redundant as the Cabinet War Rooms under Whitehall became fully operational in 1940. The Down Street bunker then became the underground bunker for the Railway Excecutive Committee and London Transport and it was here than other underground passages were created to link Buckingham Palace, the Ministry of Defence and other government buildings to the underground network, creating a secret city beneath the capital.

Move to the present day and the magnificent South Street house where Ashfield worked on turning sections of London Underground into bunkers for Chamberlain and Churchill is now for sale.

The house is laid out over lower ground, ground and five upper floors connected by an impressive cantilevered staircase and offers a breathtaking example of Queen Anne Revival Style architecture.

The house is characterised by high ceilings, impressive windows and elegant cornicing to achieve an effect of symmetry and order. The lower ground floor contains an impressive family kitchen/dining room with a large central island, aga-style ovens and a great ornate fireplace. To the front there are staff quarters and an assortment of storage rooms and facilities.

The ground floor has an entrance hall with diamond-patterned stone flooring, and leading off it are the elegant study with bay windows and grand formal dining room capable of seating eighteen guests. Like many rooms in the house, it benefits from a stately original stone fireplace, ceiling cornicing and impressive windows.

The first floor contains a huge drawing room and enormous 11m ´ 4m reception room with high ceiling and floor-to-ceiling windows, while the second is dominated by the extravagant principal bedroom suite. This luxury living space is large enough to be used as another room for entertainment in the day and gives access to the main bathroom and vast walk-in dressing room with its own bay windows. There are five further bedrooms on the third, fourth and fifth floors while the impressive fifth-floor roof terrace offers stunning panoramic views over Mayfair.

Peter Wetherell, Chief Executive of Wetherell says: “We are very excited to bring the Mayfair home of Lord Ashfield, the brilliant founder of London Underground, to the market. It is here during 1939 and 1940 that he worked on top secret plans to turn Down Street Tube Station into a bunker for the Prime Minister and cabinet and build secret passages under the city connecting Royal and government buildings to the underground network. Much of what when on during the War years remains classified to this day. There are only 933 blue-plaque houses in the city and it is always hugely attractive to be able to live in the footsteps of great Londoners past and present.”