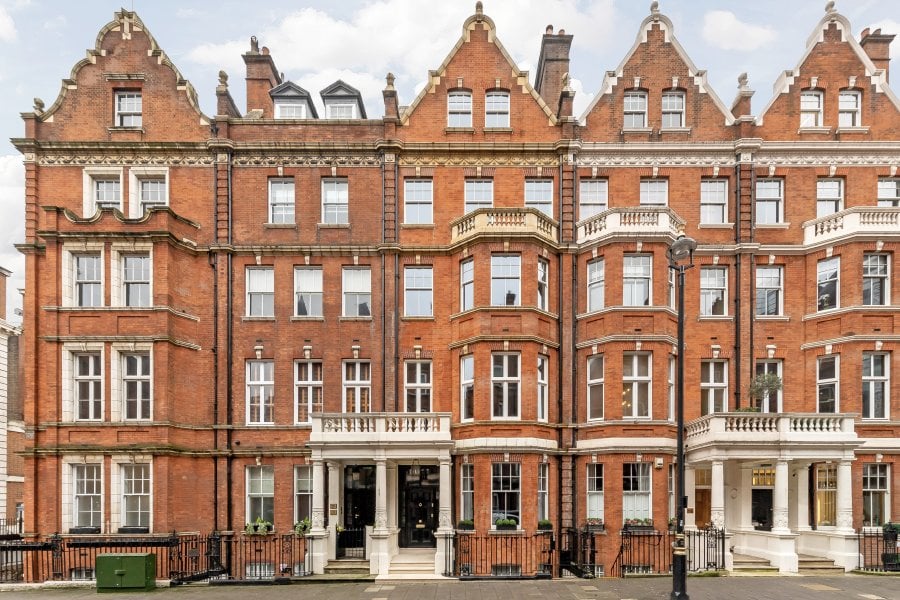 The late-Victorian townhouse on Park Street was originally built in 1891-94 to the designs of architect Sir Robert W. Edis under the auspices of the 1st Duke of Westminster. The five storey red brick façade has deep multi-storey bay windows, pillared entrance portico, Dutch style gable and elegant stone and terracotta detailing.

The original occupant was James Hamilton, the 3rd Duke of Abercorn (1869-1953), who in 1894 married Lady Rosalind Bingham, daughter of the 4th Earl of Lucan, the couple moving into the townhouse on Park Street as their new marital home. The Duke had a successful political career and was the godson of the Prince of Wales so the Park Street townhouse entertained Royalty, politicians and the Lucan family.

In 1922 the Duke was appointed as the Viceroy & Governor of the newly created Northern Ireland and relocated to Belfast with the Park Street townhouse then becoming the London home of Sir Patrick Hastings QC, the Attorney General. When Sir Patrick died in 1952 the property was converted into a boutique hotel a role which continued until the townhouse was converted into a new residential development.

Built behind the retained period façade, the residential development provides six brand new two bedroom, two bathroom apartments, ranging from 875 sqft (81.3 sqm) up to 1,478 sqft (137.3 sqm) in size, with one apartment per floor over lower ground, ground and four upper floors. The apartments are approached through an elegant entrance hallway with a passenger lift to all floors.

Each apartment has a spacious reception room with Oak timber flooring in a Nero finish, flume feature fireplace and feature lighting, with some of the apartments incorporating a deep bay window. The reception rooms provide for a spacious living area and a 6-8 seat dining area.

The apartments have been finished to a high specification with features including home automation systems, air-conditioning and Banham CCTV security. The apartments are all available for immediate occupation and can be rented furnished or unfurnished.

Peter Wetherell, Founder & Chairman of Wetherell says: “Offering bright and spacious living spaces, the brand new apartments at Park Street are designed in a contemporary and elegant style that is the epitome of modern living in Mayfair. Available for immediate occupation these turn-key luxury apartments can be rented furnished or unfurnished and are ideal for a couple, business person or family with a young child wanting a central London home.”

Located on the highly sought after Western side of Mayfair, close to Hyde Park and Park Lane, Park Street is the longest street in Mayfair, running from South Street to Oxford Street and connecting with Mount Street, Mayfair’s local high street. House building on Park Street was originally started in the late 1720s and was completed in the late 1770s. However the Northern end of Park Street (which contained the Duke of Abercorn’s townhouse), along with much of Green Street which intersects it, were redeveloped between 1891-94 by the Grosvenor Estate to provide a range of grand late-Victorian red brick or terracotta backed townhouses under a masterplan devised by architect Sir Robert W. Edis. Park Street and Green Street remain two of Mayfair’s most popular addresses due to the size and grandeur of the late-Victorian properties on both streets.

The apartments on Park Street are available to let priced at £1,150 per week for a two bedroom apartment on either the ground or second floor, or at £1,200 per week for a first floor or larger lower ground floor apartment.

For further information contact the lettings department of Wetherell on 020 7529 5588.