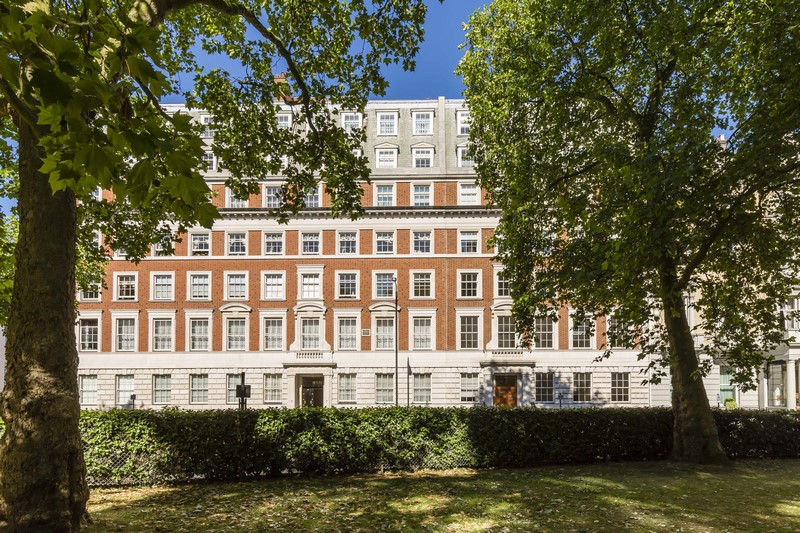 An elegant Westminster plaqued 2,418 sq.ft. (224.68 sq.m.) two bedroom lateral apartment, plus a separate staff studio, at 5 Grosvenor Square in Mayfair, once the official London residence and offices of American Ambassador Walter Hines Page, is being brought to market for the first time in over 50 years by sole agent Wetherell.

Located across the entire fourth floor of the grand brick and stone Neo-Georgian apartment building at 5 Grosvenor Square the apartment has a large double-volume 43’4 ft. (13.22m) reception room which spans the entire width of the building with five windows offering panoramic views over the 6.1 acres (2.5 hectares) of Grosvenor Square gardens.

Decorated to modern standards, the apartment has a large well-equipped kitchen, arranged in galley style, complete with a breakfast area. The principal bedroom suite has a dressing area with built-in wardrobes and a main bathroom with freestanding feature bath and walk-in shower with steam room capability. The guest bedroom suite has its own ensuite shower room and built in wardrobes. The bedrooms offer views over Mayfair down Brook Street towards Claridges, New Bond Street and Regent Street.

The apartment building at 5 Grosvenor Square stands on the site of two London townhouses which in 1901-2 were redeveloped by Mayfair builders Patman & Fotheringham, under the auspices of Grosvenor estate surveyor Eustace Balfour, to provide lateral apartments, with a new floor added to the property and the interior fit out done by Harrods in 1904.

The new residents of these luxurious pieds-à-terre included Consuelo, Dowager Duchess of Manchester, Sir Walpole Greenwell and the 12th Earl of Home.  Between May 1913 and October 1918 half of the building served as the London residence and offices of Walter Hines Page (1855-1918), the United States Ambassador to the Court of St James’s.

In 1882 Page had shrewdly befriended Woodrow Wilson, when Wilson was just a lawyer with political ambitions, with Page championing Wilson in his newspaper articles and magazines. In March 1913 President Woodrow Wilson rewarded this loyalty by appointing Page to the post of US Ambassador to the United Kingdom.

The original Embassy at 4 Grosvenor Gardens needed refurbishment, so the US Government took a lease on 5 Grosvenor Square and it became Page’s base in London. This began the long presence of the American Embassy in Grosvenor Square which continued up until 2017.

Although Page was lobbied heavily by Prince Lichnowsky, the Kaiser’s Ambassador to London, to help keep America out of WW1 Page took an unabashedly pro-British stance and wrote articles in the New York Post and The Atlantic supporting America joining the war. In March 1917 a heavy Zeppelin raid on London triggered an outraged Ambassador Page to write a detailed report to President Wilson and Congress about “German barbarism”; a month later the President and US Congress declared war on Germany.

In October 1918 Page became ill and was forced to resign his post as American Ambassador. Today a Westminster plaque on the building commemorates that it was once the London residence of Walter Hines Page as United States Ambassador who lived there between 1913-1918.

During WW1 (between 1915 to 1919) the half of 5 Grosvenor Square not used as the US Embassy was acquired for military use and became known as the Coulter Hospital Building, affiliated with Queen Alexandra’s Military Hospital at Millbank. It provided suites for senior military officers convalescing after surgery.

In 1919 the Embassy and military vacated with the building which was converted back into private apartments. The existing building was erected in 1961 in Neo-Georgian style to complement the rest of the square.

Peter Wetherell, Founder & Chairman of Wetherell says: “This spacious and elegant 4th floor apartment has an illustrious history and was once part of the US Embassy in Grosvenor Square under Ambassador Walter Hines Page who lived there between 1913-1918. Located on the favoured Eastern side of the square the apartment building at 5 Grosvenor Square is Ambassadorial in its style and design with grand marble steps lifting you from the pavement towards the impressive stone flanked Oak entrance doors.”

Peter Wetherell continues: “Once dominated by diplomatic buildings, Grosvenor Square is currently being returned to its residential origins, with buildings being converted into luxury apartments and new hotels, this transformation will make the square the best residential address in central London.”

Wetherell highlight that Grosvenor Square is currently benefitting from a luxury makeover. The former Canadian Embassy and US Naval Building have been transformed back into luxury apartment buildings and the former US Embassy is currently being redeveloped a 5-star Rosewood Hotel with cafes and luxury boutiques.

The 6.1 acres (2.5 hectares) central garden square is also set to be transformed with a new landscaping scheme and enhanced public realm, with the formerly closed area in front of the old embassy building being transformed into a magnificent public piazza fronting onto the new Rosewood Hotel.

The purpose built apartment block at 5 Grosvenor Square benefits from a smart lobby with uniformed porterage providing both service and security. The apartment can be accessed via passenger lift or stairs and from the lift lobby there is the main front door and separate staff access to the kitchen. Two secure underground parking spaces are being sold with the property, accessed via a gated entrance in Three Kings Yard.