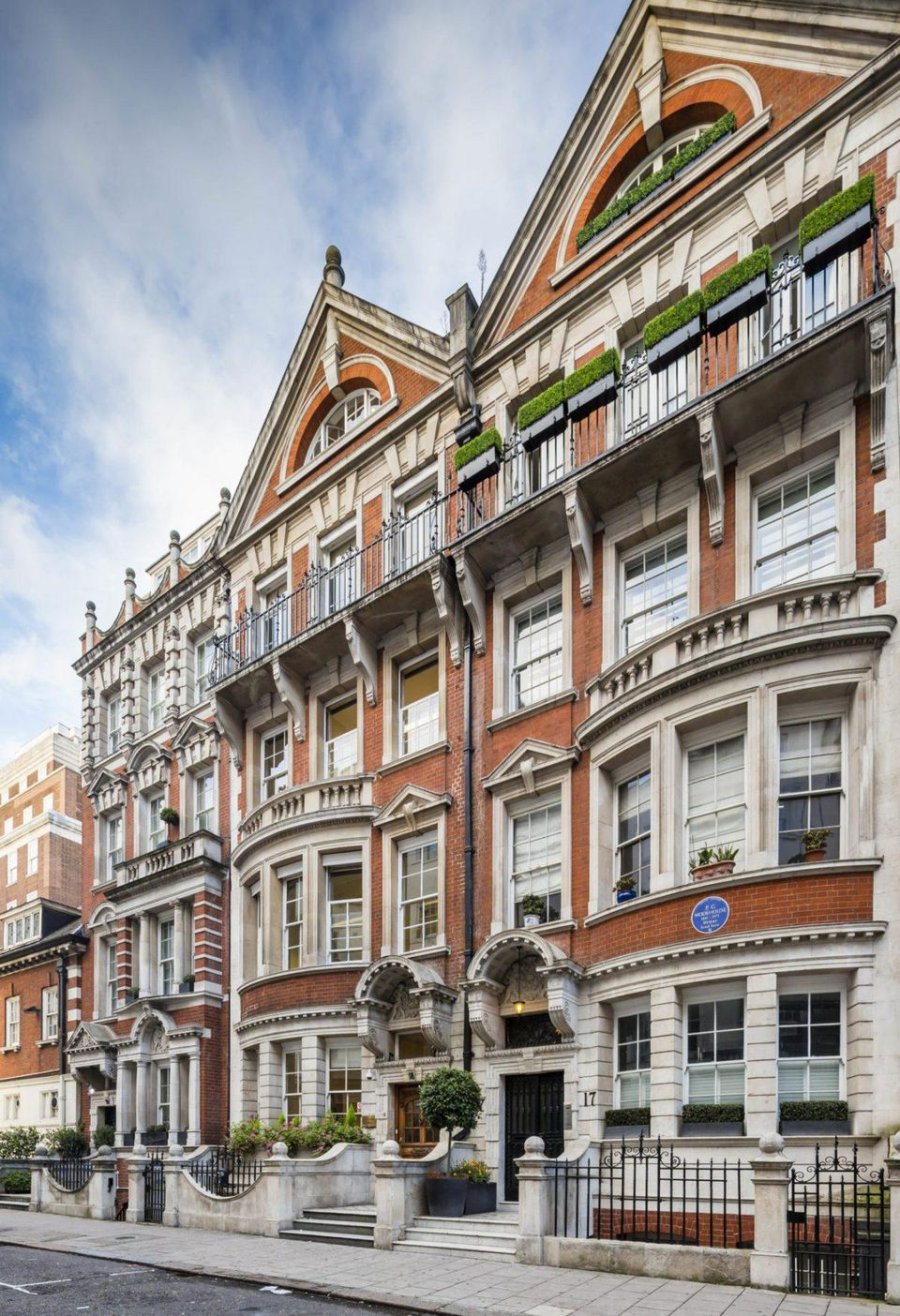 The luxury penthouse apartment in the Mayfair mansion where Jeeves and Wooster novelist P.G. Wodehouse once lived and wrote some of his classic comic works is now available to buy or rent through leading Mayfair agents Wetherell. This grand, blue plaque townhouse served as the famous writer’s sanctuary and literary salon during some of his most successful years between 1927 and 1934. The author’s nephew Patrick described the house as ‘homely and warm, with a dotty Edwardian flavour just like the books Uncle Plum spent all his time writing.’

Available for sale at £6.95m or to rent for £3,000 per week through Wetherell, this superb Mayfair penthouse apartment possesses refurbished ultra-modern interiors and includes two bedrooms, two bathrooms, a reception and a spectacular roof terrace.

The Grade II listed Neo-Baroque townhouse was designed by Victorian architect Sidney M. J. Smith and finished in 1897. Once a single grand home in the age of the great houses, it was a royal residence from 1920 when it housed Alexander Mountbatten (1886-1960), 1st Marquess of Carisbrooke, grandson of Queen Victoria and relative of Louis Mountbatten and Prince Philip. Its status as one of just 933 blue plaque houses in London, however, comes from the enduring fame of P.G. Wodehouse.

Pelham Grenville (‘Plum’) Wodehouse (1881-1975) lived at the house with his wife Ethel and stepdaughter Leonora. They were looked after by a retinue of 11 servants and during his time at number 17 Wodehouse wrote ten books, usually in his bedroom, which he found ‘really jolly’; these included Summer Lightning (1929), Very Good, Jeeves (1930) and Right Ho, Jeeves (1934).

Wodehouse is widely regarded to be the finest British comic novelist of all time. He was the creator of several iconic characters including the suave Psmith and the pig-obsessed Lord Emsworth. His most famous creations, however, are undoubtedly the foolish English gentleman Bertie Wooster and his sagacious valet Jeeves, whose quick wits constantly rescued his unwitting master from tight situations of his own making.

The pair have been described as the greatest comedy double-act of all time. Wodehouse turned to writing after a brief career in banking at the age of 20 and became Britain’s best-selling author in the 1920s, when he was at the centre of the London literary and theatre scenes. During the period where he lived at 17 Dunraven Street he divided his time between Britain and America, where he was a writer for Metro-Goldwyn-Mayer.

He continued to publish new Jeeves and Wooster stories until his death in 1975 but as the critic Anthony Lejeune has argued they retained a timeless setting recalling Wodehouse’s golden period between the wars. His plaque at Dunraven Street was unveiled by HM The Queen Mother in 1988, who commented ‘I think that Wodehouse's greatest gift is that 50 or 60 years after many of his books were written they still make us all laugh, and I am sure that generations to come will continue to laugh at them just as much as we have done.’

His predecessor at number 17 is an equally interesting figure, his biography providing a window into the changes that swept Europe at the start of the twentieth century. Alexander Mountbatten was one of many of Queen Victoria’s multinational grandchildren, baptised at Windsor Castle in December 1886. Christened as a Battenberg, Alexander’s German family were forced by royal warrant and anti-German feeling to change their name to Mountbatten in 1917. In the post-war world his branch of the royal family, being too ‘foreign’ and too removed from the King, had its allowance cut and as a result Alexander was forced to become the first royal in history to take a commercial job, joining Lazard Brothers bankers.

After the Second World War the house was divided into apartments and in the last decade the top two floors and roof terrace have been converted into this lavish penthouse. After a full refurbishment the lowest floor is home to an open plan kitchen and dining room with top of the range appliances, chandelier and French doors leading on to a balcony running the width of the building. Next door is the bright and airy reception room, a luxurious and comfortable living space. Glamorous touches can be found throughout, including black wooden floors and several large wall mirrors.

Walking upstairs offers a stylish monochrome principal bedroom with built in storage and en suite bathroom, leading on to the second bedroom with its own extravagant dressing room and en suite.

The rooms are ultra modern in design, sleek surfaces coloured with a sophisticated palette of grays and creams, with mirror accents and chandeliers throughout the space. This second floor up also gives access, via a grand chrome spiral staircase, to a private black timber 2,400 sq. ft. roof deck with panoramic views over London’s West End.

Peter Wetherell comments: “This stunning apartment not only offers some of the best views and most extravagant interiors in Mayfair, but it is also a chance to be part of London history. At Dunraven Street a resident can live in a former royal residence, and follow in the footsteps of the great P.G. Wodehouse in the home where he wrote some of his most acclaimed works.”

Dunraven Street is located close to Park Lane and Hyde Park and is just a short stroll from Mount Street which is Mayfair’s local high street. It is also near to the shops of Bond Street and Oxford Street.