The 279 acres that form Mayfair comprise nine distinct neighbourhoods, each with their own features, buyer profiles and top addresses. 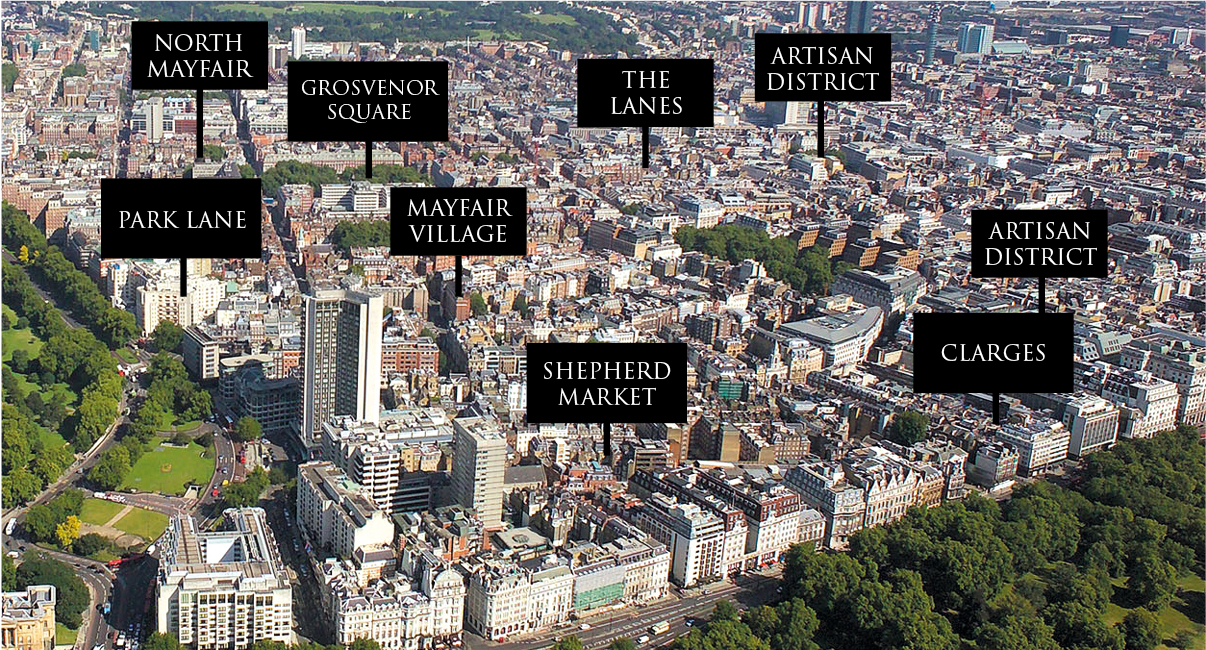 Our latest research in association with Dataloft / Lonres show that Mayfair is the home to 5,118 permanent residents, over 42 nationalities, with over 42% aged between 25-44. In terms of sales Mayfair has achieved on average £2,256 per sq. ft. recording a premium of 39.5% over the rest of prime central London.

This is the first true in-depth analysis of the neighbourhoods that make up the international district of Mayfair. Each neighbourhood has its own characteristics and attractions that drawer certain types of buyers to them. We have looked at the best addresses, key developments and analysed distinct buying habits that gives each area its own personality, each contributing to Mayfair’s special character. 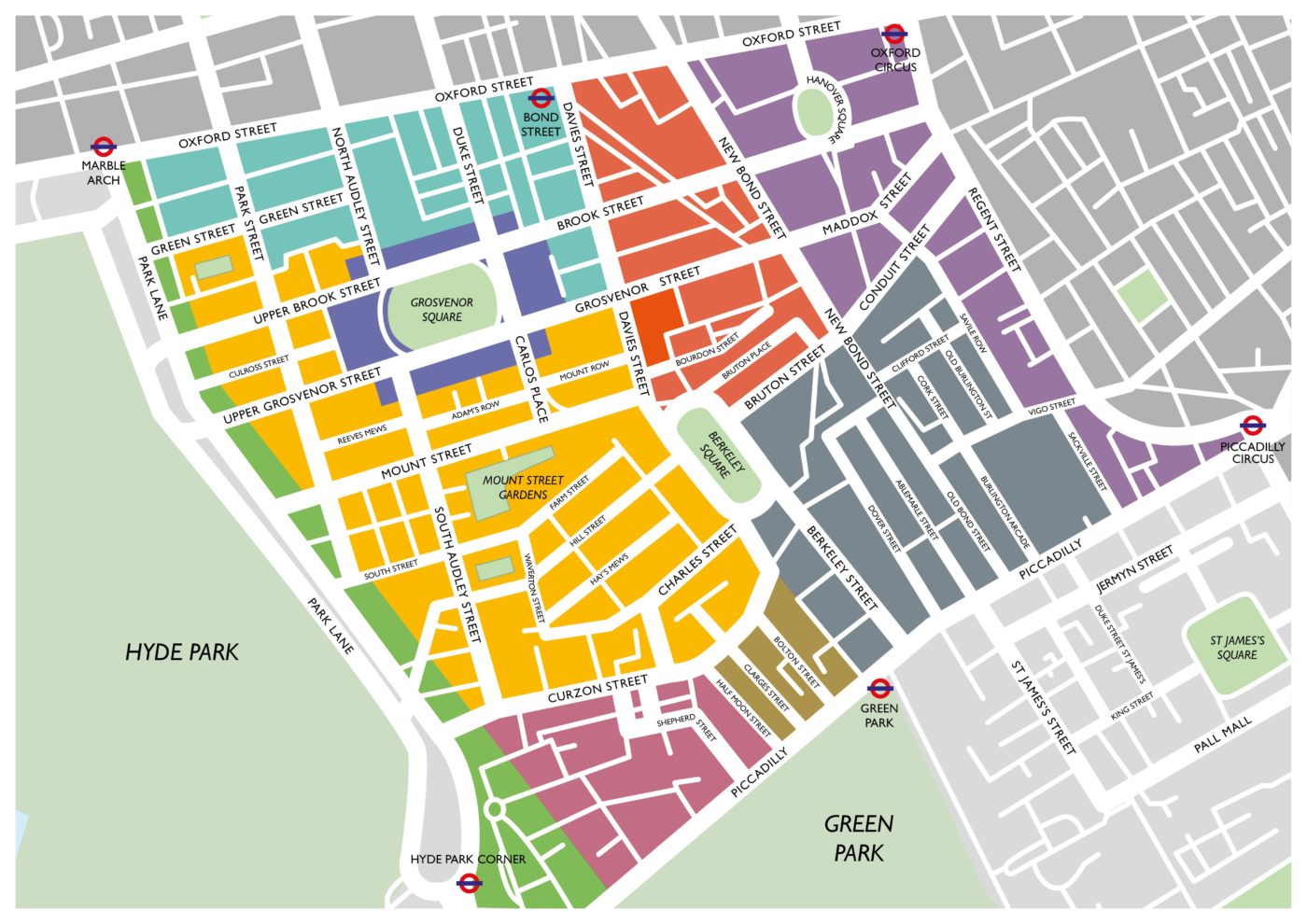 Throughout history Mayfair has been an exclusive address that represents a way of life, whether buyers look for feeling of community and peaceful ambience of Mayfair Village, the buzzy bars and restaurants of North Mayfair, the boutique cafes of The Lanes or illustrious Hyde Park views along Park Lane, Mayfair offers something for everyone. 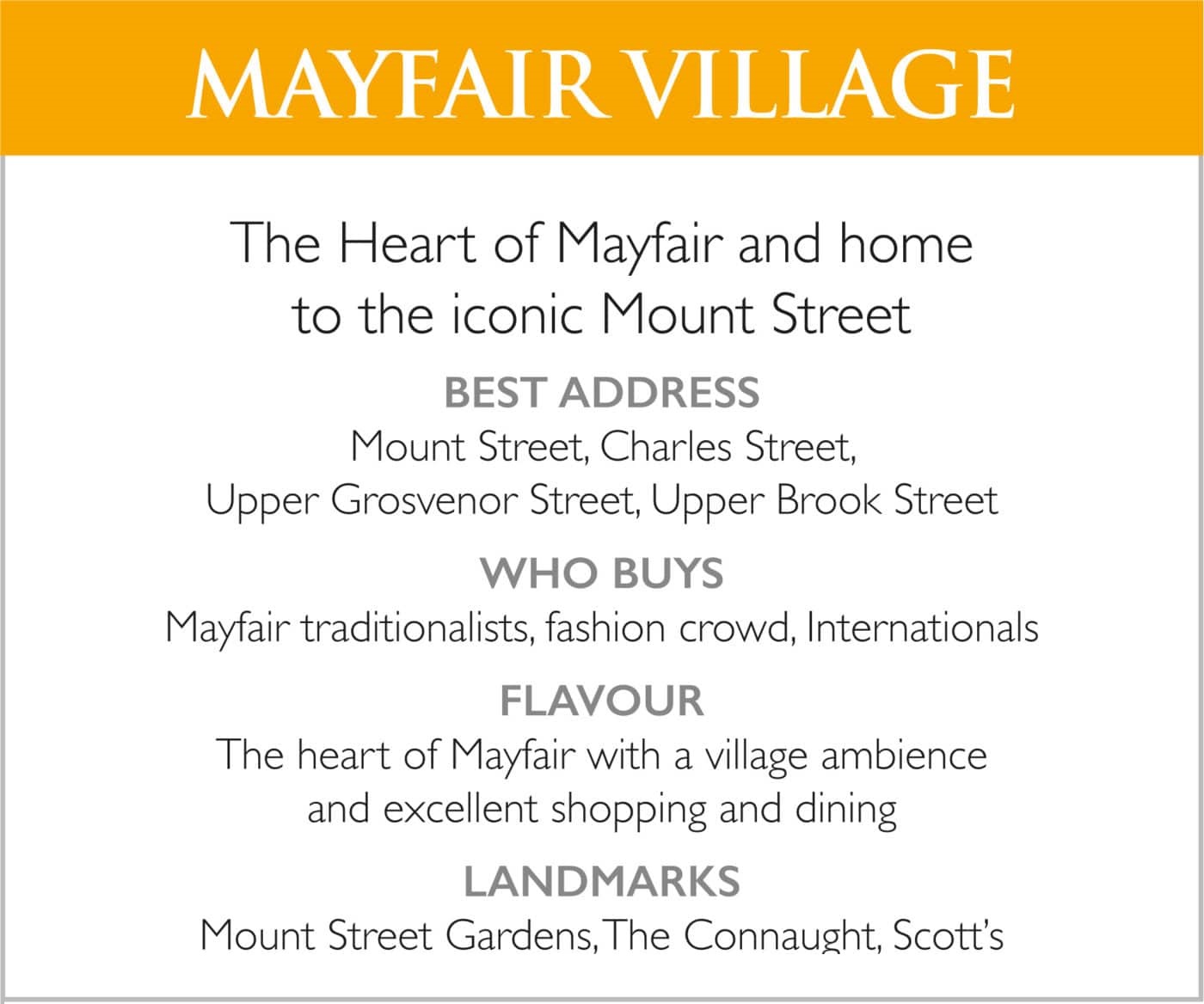 The true core of Mayfair, ‘the village’ is the postcode en vogue for traditionalists looking for a home close to the best establishments in London. Transformed into a luxury destination in 2010, following an £80 Million investment into the area, Mount Street now attracts world-leading brands that bring the most exclusive shoppers to the traditional pavements of Mayfair Village.

In terms of residential sales, values along Mount Street have risen by 199% since 2005, with apartments on the iconic street selling on average for £3,227 per sq. ft. Boasting a host of unique addresses, Mayfair Village provides a village ambience in the heart of a bustling city, a local butchers, boutique delicatessens and independent print and stationary stores share space with the illustrious Connaught Hotel, whilst Mount Street Gardens is the equivalent of a village green in a quaint country setting. 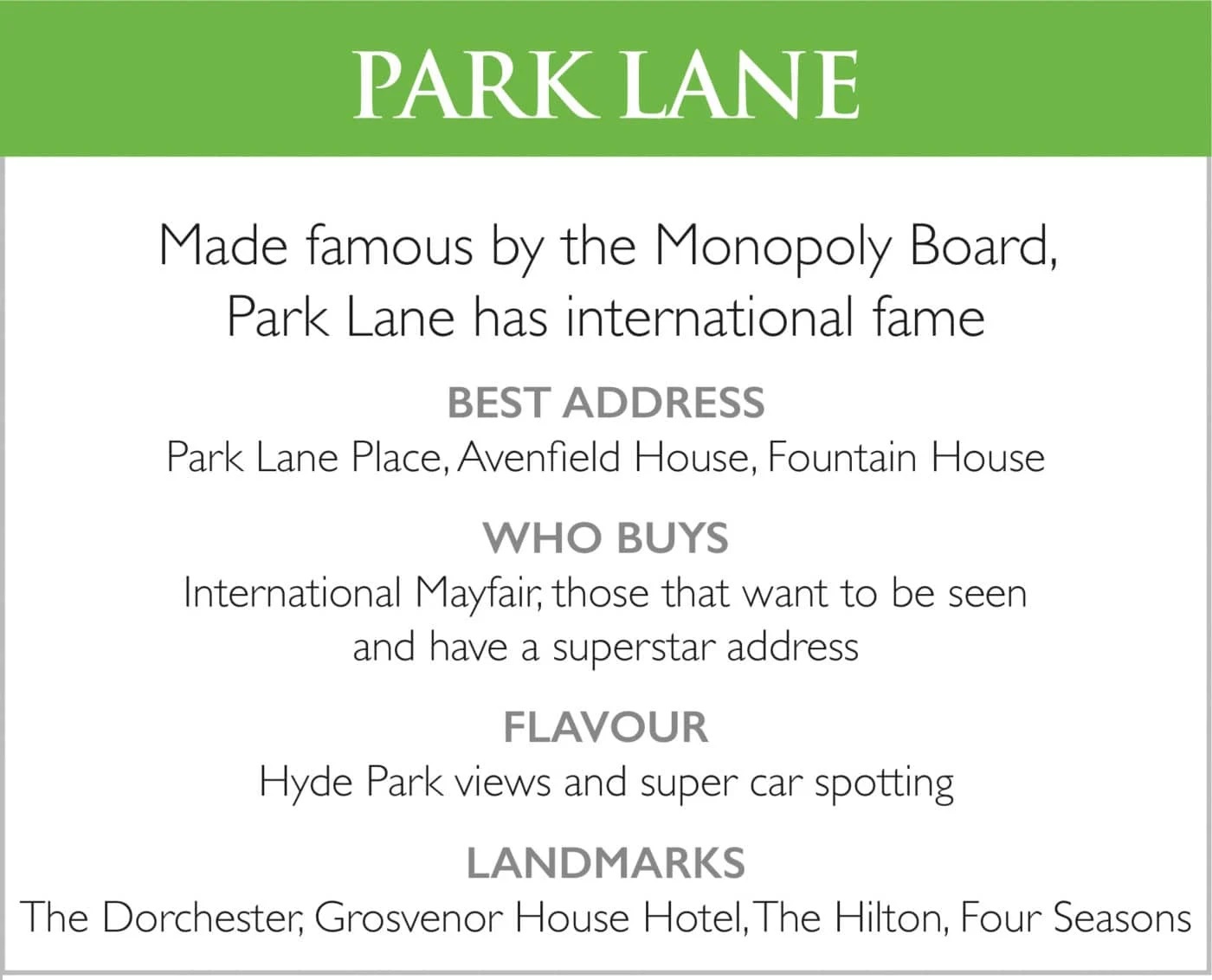 Occupying the entire West side of Mayfair, Park Lane remains the ultimate international destination. A car fanatics dream, the latest super cars are often gracing or parked on the streets, whist the owners enjoy a meal at the Dorchester, a picnic in the park or in residence of one of the prime properties located alongside the famous Hyde Park.

Enjoying encapsulating views of the park, this area of Mayfair will always be a major drawer for international buyers that crave a home on one of the best connected streets in London, reaching Marble Arch and Oxford Street to the North to Curzon Street and connecting to Piccadilly to the South, travelling to Park Lane by car is an essential convenience. 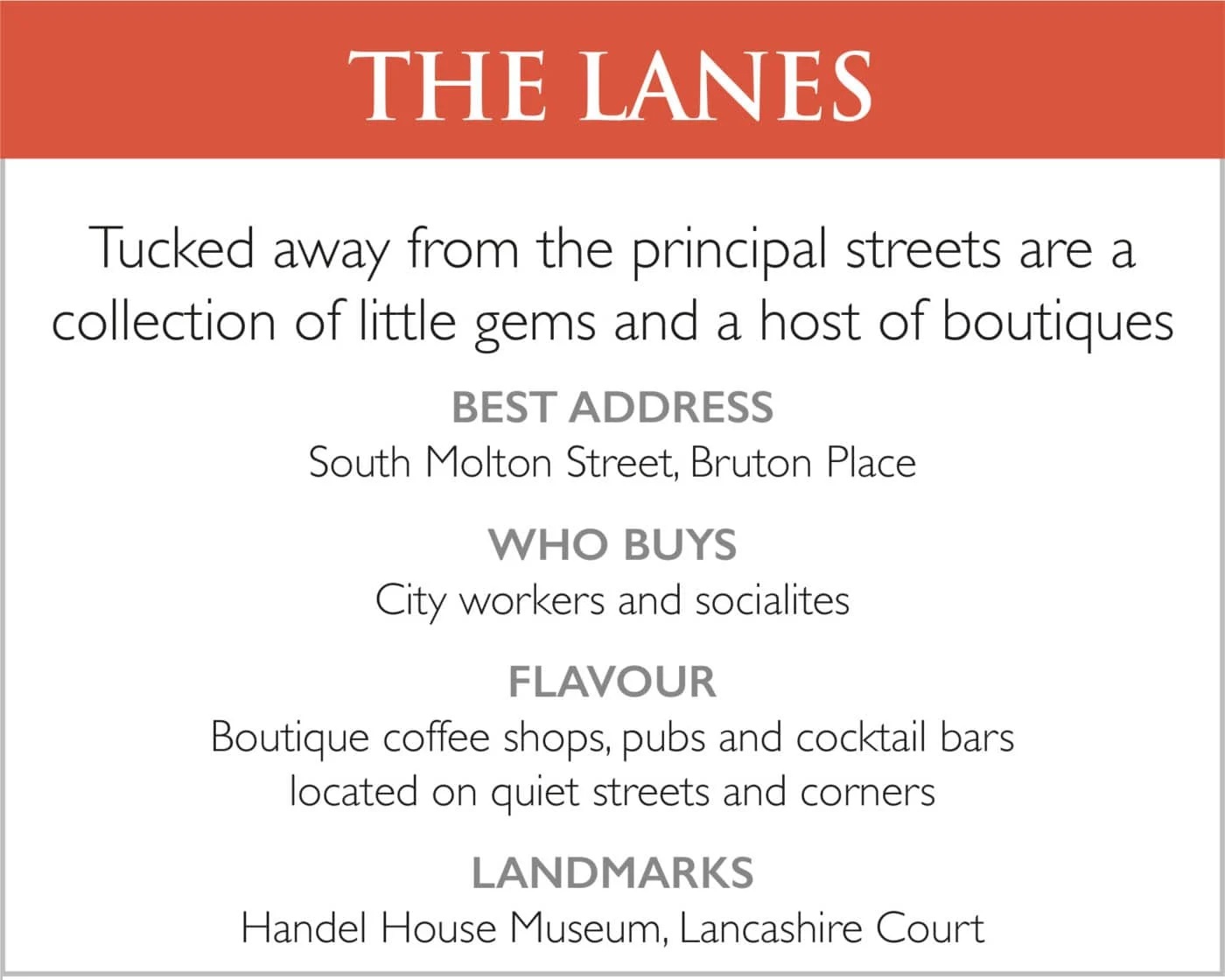 Located between North Mayfair and Mayfair Town, The Lanes attract a young crowd that want a break from the bars and night life to enjoy a peaceful coffee or bite to eat in one of the many boutique cafes and eateries located in the small pockets between the more established luxury addresses, whilst also taking in the vast spaces of the Phillips Auction House. 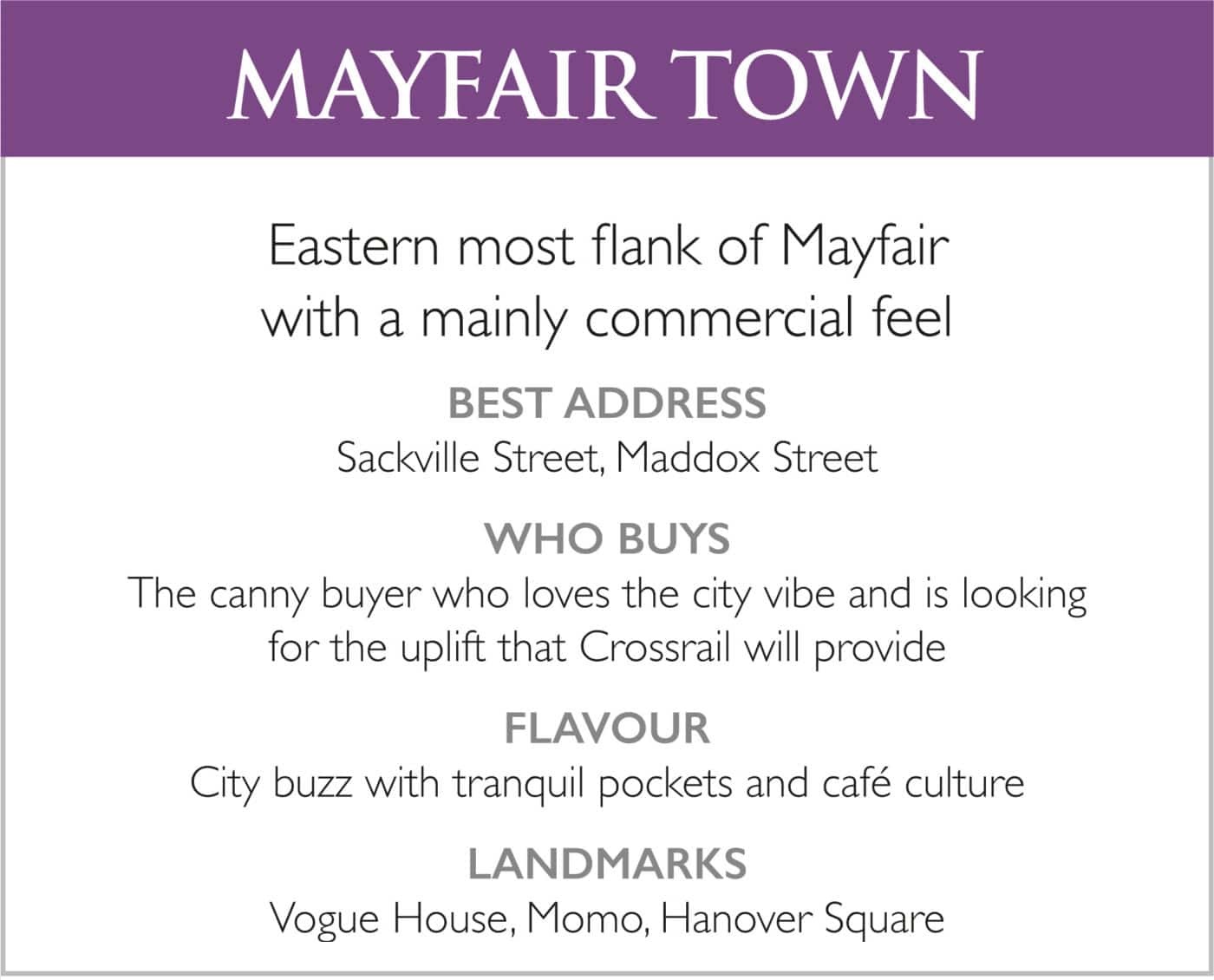 Located on the Eastern most flank of Mayfair, bordering Regent Street, Mayfair Town has a city buzz that appeals to young professionals looking to take advantage of numerous buzzy bars, restaurants and cafes, as well as the benefits Crossrail will bring to the area.

The oldest neighbourhood of Mayfair, the area that comprises Mayfair Town first appeared on the map in the mid 17th Century. Named after King George I, Hanover Square, completed in 1719, making it the oldest prime garden square in Mayfair. The buildings surrounding the square and on nearby George Street were designed in a Germanic style to honour the new king, quickly becoming one of London’s most fashionable addresses.

Fast-forward to modern day and whilst a few of the original 18th century buildings remain largely intact, the square has been redeveloped through time and now almost entirely occupied by offices. Still an attraction for the high-profile and notable, Hanover Square is the home of a number of global businesses, including the London office of British Vogue and Conde Nast. 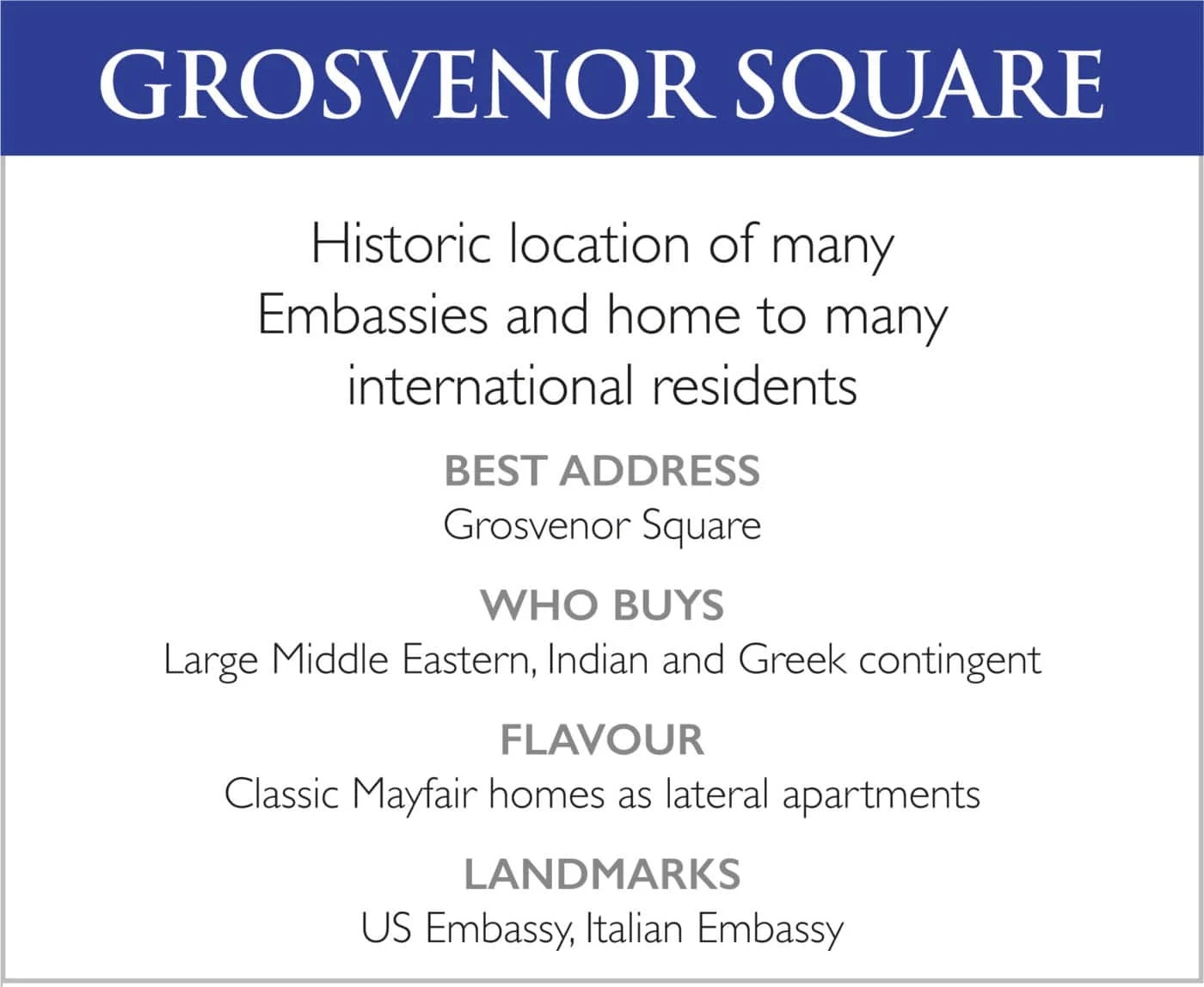 Just a decade ago, prices and pound per square foot values in Grosvenor Square lagged behind rivals such as Eaton and Cadogan square. Ten years on, the picture is very different and now values in Grosvenor Square have surpassed those in Eaton and Cadogan Square with a thrilling portfolio of £5,000 per sq. ft. plus developments in housing stock underway. Wetherell, forecast that the new projects on Grosvenor Square and other locations will within the next decade, make Mayfair a £10,000 per sq. ft. location, and the number one address in prime central London.

First laid out In the 18th Century by Sir Richard Grosvenor, the square provides a safe and secure location in the heart of Mayfair. The current home of the US Embassy, Grosvenor Square is one of the most recognisable addresses in Mayfair and across the globe, as UHNW buyers still retain the desire to own a home in and around the famous garden square. 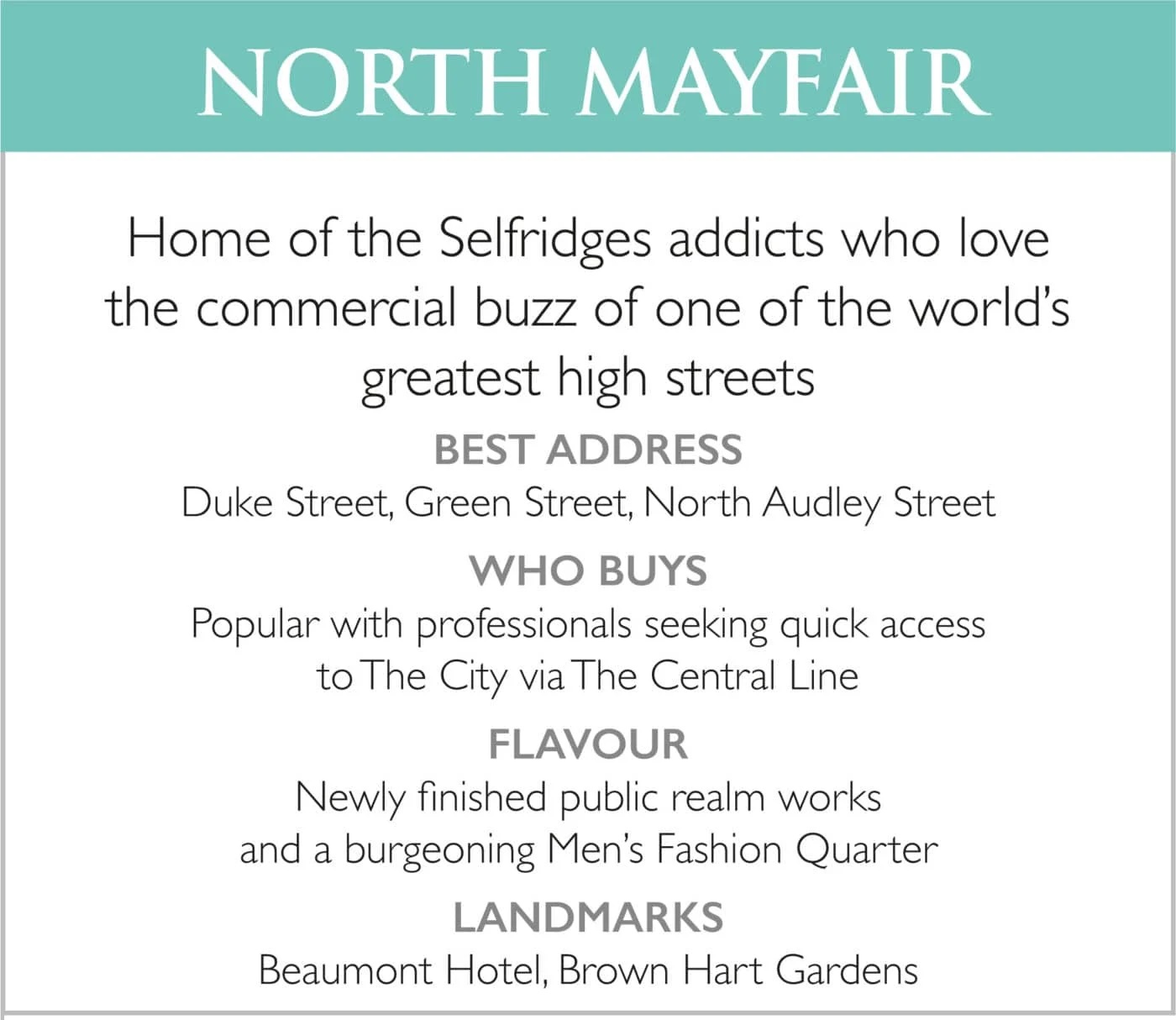 Popular with professionals seeking quick access to the City via the Central Line at Bond Street, whilst retaining the desire to live the Mayfair lifestyle. The northern tip of Mayfair bordering Oxford Street to the North, the area has recently undergone an extensive regeneration programme to bring the vast amount of period buildings up to modern standards.

Key streets such as Duke Street and North Audley Street provide some of Mayfair’s finest homes, with residents enjoying easy access to Selfridges on Oxford Street, whilst being a short distance from the boutique luxury outlets on Mount Street and nearby Bond Street. 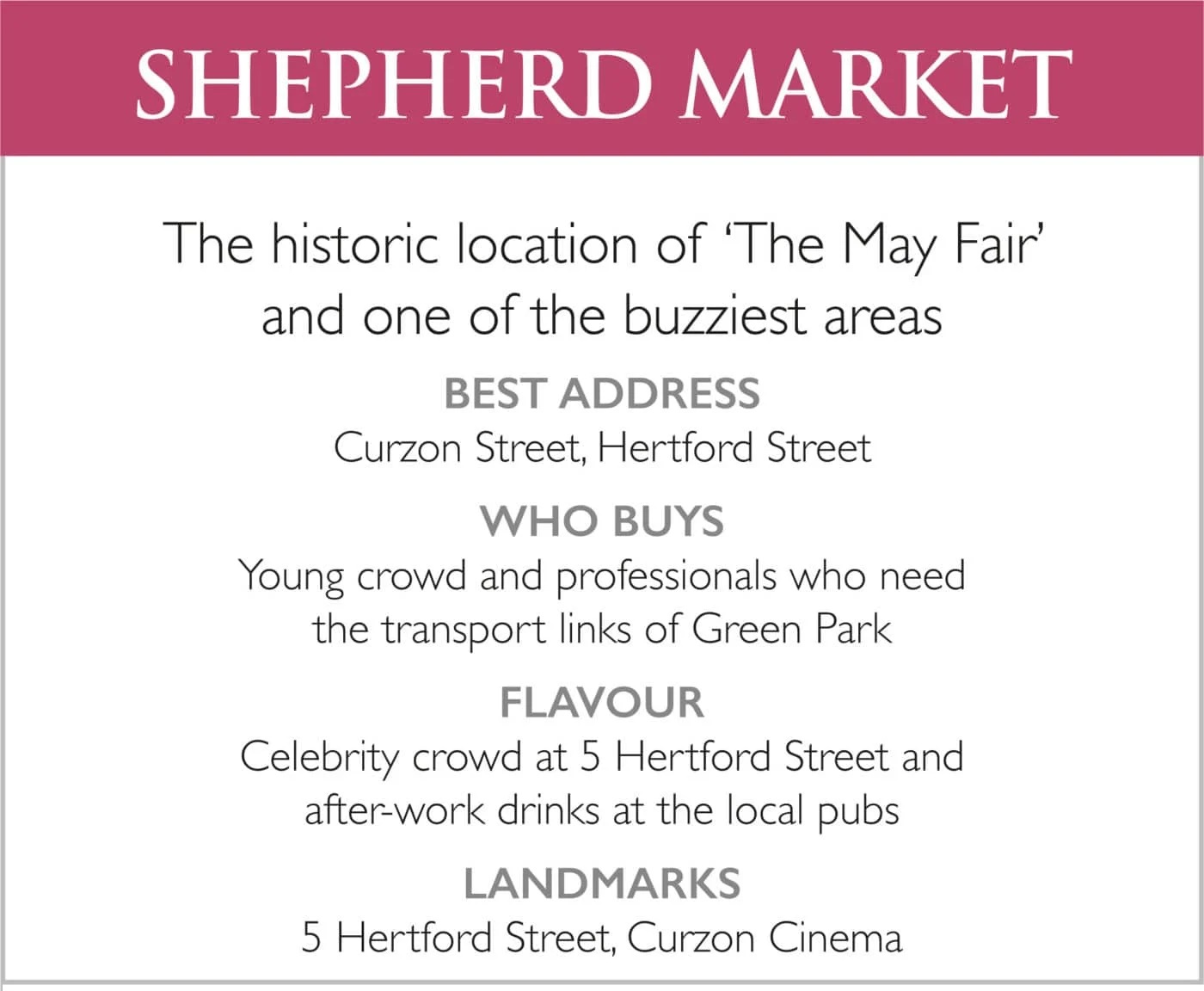 The original site of the 17th century May Fair, from which the prominent prime central London area takes its name, Shepherd Market has a history of social gatherings, late night entertainment and debauchery. Now, a busy piazza in South Mayfair, popular with young celebrities, professionals and socialites, the charming nest of narrow cobbled streets is lined with new stylish boutiques, fashionable restaurants and Victorian pubs. 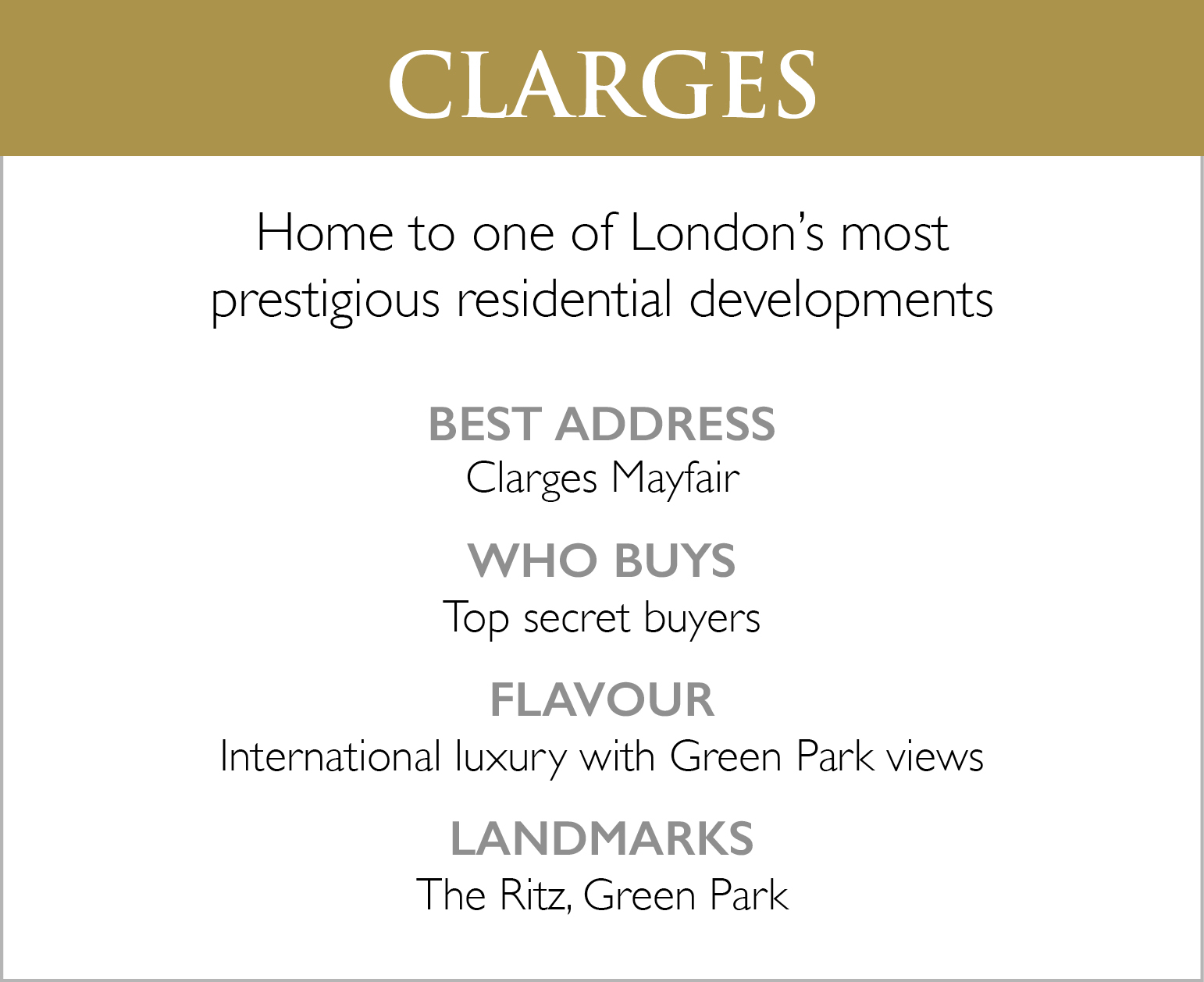 Bordering Piccadilly to the South and Shepherd Market to the West, Clarges is the location of London’s most prestigious development. Providing Ultra Prime, Ultra Modern residences the Clarges Mayfair development will attract a wealth of high-profile buyers looking to call, Mayfair’s equivalent of One Hyde Park, home. 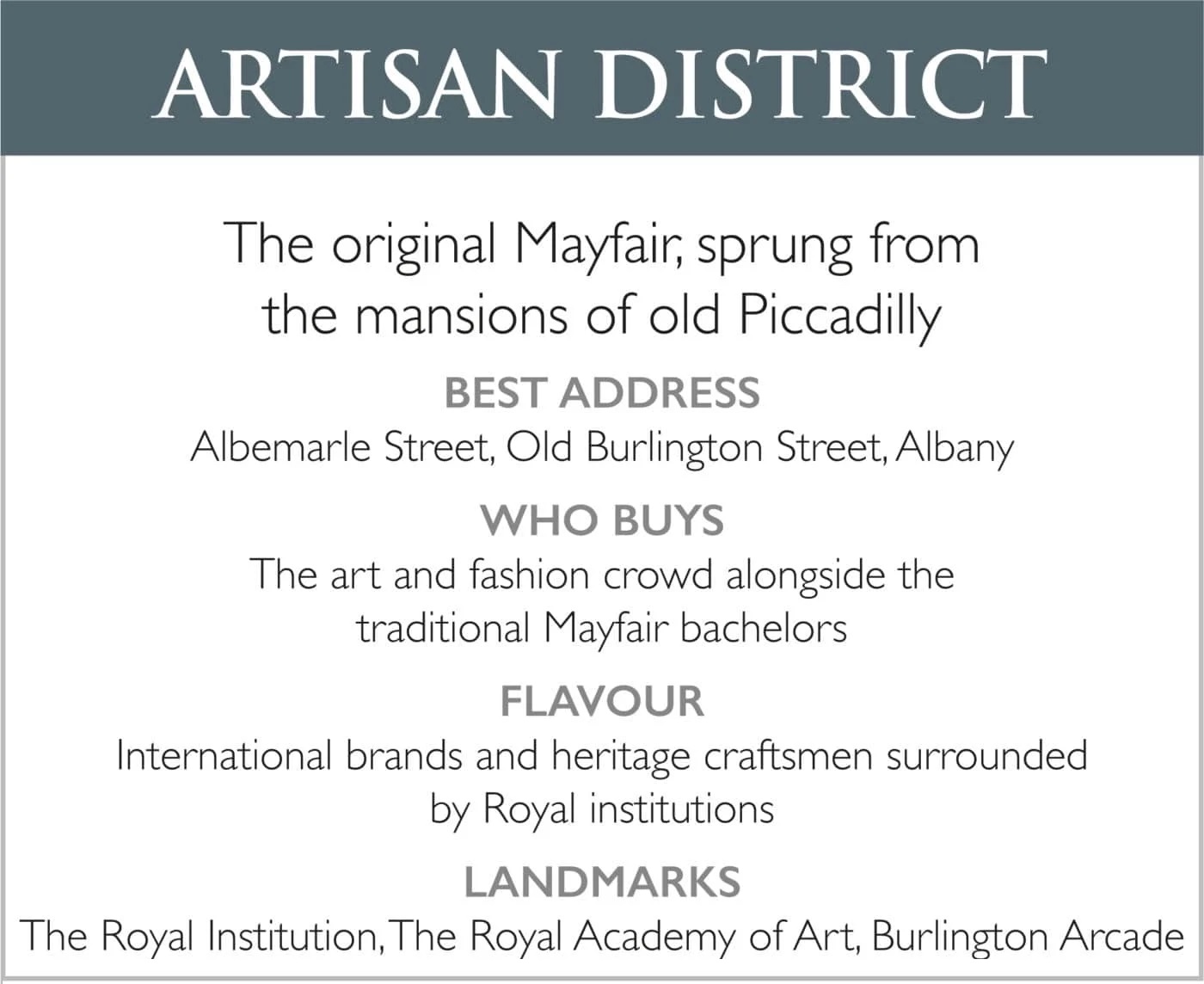 In 1837, London’s first truly luxury hotel, Brown’s opened on Albemarle Street, and the influx of wealthy merchants, businessmen and visitors to the hotel started the street’s association with luxury boutiques, restaurants and antique shops. In 1905 the cabinetmaker Mellier & Co opened a flagship building at No.26 Albemarle Street on the site of St George’s Chapel. The cabinetmaker was replaced by a showroom for luxury Buick and Cadillac motorcars.

Move forwards to the present day and Albemarle Street is home to a range of high profile brands including Paul Smith, Garrard, Graff and Globetrotter. The street is also known for chic restaurants including Hix, Sumosan and Gymkhana, and art galleries including Coll & Cortes, Agnew’s and Marlborough Fine Art.