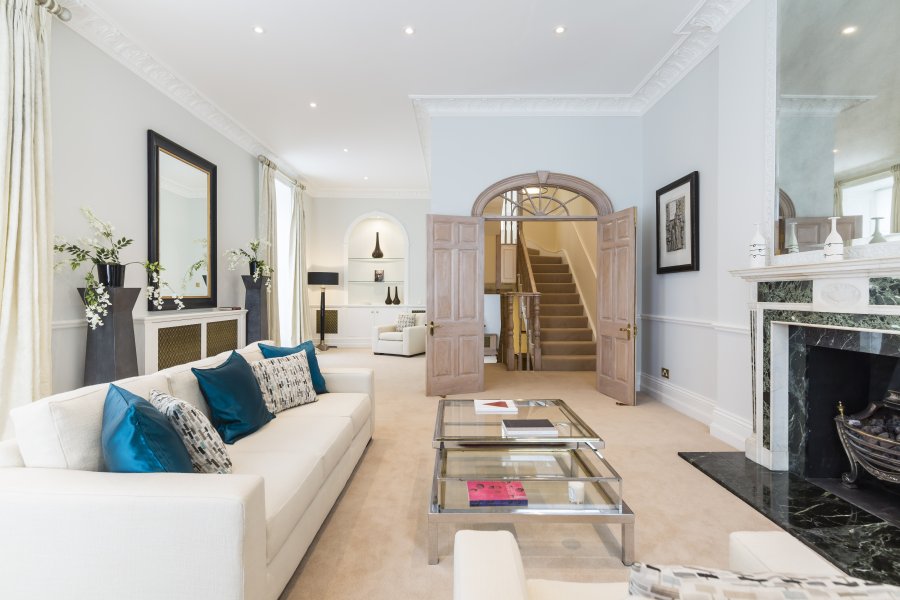 Providing 4,032 sq.ft. of living space, with a private garage and roof terrace, the elegant five bedroom Blue Plaque Mayfair townhouse at 15 South Street of Catherine Walters (1839-1920), the famous courtesan and lover of Royals, aristocrats and other powerful men is seeking a new resident, available via Mayfair agent Wetherell.

Catherine Walters, whose nickname was “skittles”, because she was good at bowling over men and capturing their hearts, was the most famous Mayfair courtesan (high-class prostitute) of the Victorian and Edwardian eras. Catherine’s many lovers were alleged to have included Bertie, Prince of Wales (later King Edward VII), Spencer Cavendish, later the 8th Duke of Devonshire, Prince Alfred, Duke of Edinburgh, Emperor Napoleon III, George, Lord Fitzwilliam, and poet Wilfrid Scawen Blunt.

Born in 1839 in Toxteth Liverpool, Catherine was known for her classical beauty and as a 16-year old she escaped to London to seek her fortune, initially living in Soho and working as a Mayfair bar maid at a pub-and-bowling-alley in Chesterfield Street near Park Lane – hence the start of her nickname skittles.

Working in the Chesterfield Street pub in her late teens Catherine met George, Lord Fitzwilliam, her first wealthy lover, who settled £2,000 on her which enabled her to rent a home on Park Street in Mayfair, dress well and own a horse which she named Buchephalus. Catherine would capture the attention of wealthy men by walking in the evenings down Park Lane or cruising in the Cremorne Gardens in Chelsea which was a very popular Victorian-era pick-up spot for wealthy Londoners and prostitutes.

Catherine started to become famous in London high society in 1861 when the painter Edwin Henry Landseer exhibited a painting at the Royal Academy called The Pretty Horse Breaker (or The Shrew Tamed), of a beautiful horsewoman erotically reclining by a horse, the painting inspired by Catherine.

During a ride in Hyde Park in 1862, at the age of just 23, Catherine made her second serious conquest when she captured the attentions of Spencer Cavendish, Lord Hartington, the heir to the Dukedom of Devonshire.

Lord Hartington, who she called ‘Harty Tarty’ lavished money on his mistress and this enabled Catherine to rent the grand Georgian townhouse at 15 South Street which had originally been built in 1825-1826 by Spicer Crowe, designed by architect John Gandy Deering. The first owner of 15 South Street was Baron Langdale, the Master of the Rolls, who was another “friend” of Catherine’s.

From the 1860s onwards Catherine began to live a luxurious lifestyle, residing at 15 South Street, waited on by servants, and given money by lovers such as Lord Hartington, who caused a scandal in high society by parading her boldly at the Epsom Derby.

Unusually for a single woman during the Victorian era, Catherine also travelled widely, staying in the United States (where she had an affair with Aubrey Beauclerk) and Paris (where her lovers included Emperor Napoleon III and French financier Achille Fould).

In the early 1870s Catherine returned 300 love letters to another lover Bertie, Prince of Wales, who paid her a large sum of money in gratitude. Bertie’s money enabled Catherine to formally purchase 15 South Street in 1872 (where she lived until her death in 1920), and she also purchased an apartment in Paris and a hotel in Kent.

Catherine, now extremely wealthy in her own right, dropped her nickname skittles and began calling herself Mrs Baillie or Lady Baillie (although she never married a man of that name). She also became friends with William Gladstone, the Liberal politician, who began to attend tea parties at her house where they would talk about politics and the events of the day.

In 1890 she officially ‘retired’ from being a courtesan and in 1920 she died, leaving an estate worth £2,764 (several millions in current money). When Catherine’s will was read out one final scandalous secret was revealed. The house at 15 South Street and her estate was inherited by her toyboy lover – Gerald Le Marchant Saumerez – a dashing artist who was just 19 when they had first met in 1879 when she was 40.

Now 15 South Street is seeking a new resident. The townhouse provides substantial accommodation over basement, ground and three upper floors. On the ground floor there is a grand entrance hall and formal dining room, with the first floor providing a large main reception room and an adjoining dual aspect drawing room, which could be used as a bedroom. On the basement floor is the family kitchen and breakfast room, utility room and staff accommodation.

On the two uppermost floors there are four bedrooms including a master bedroom suite with walk-in dressing room and ensuite bathroom, principal guest suite with ensuite, two further bedrooms and a main family bathroom.

It is in the grand ‘L’ shaped first floor reception room with its high ceilings and marble fireplace and the adjoining drawing room that Catherine Walters would entertain guests who included William Gladstone, the Liberal politician and Spencer Cavendish, Lord Hartington (later the 8th Duke of Devonshire). In the ground floor dining room Catherine would act as hostess for Lord Hartington, and he was a frequent visitor to her bedroom suite which is on the second floor of the house.

Since Catherine’s day the townhouse has been completely modernised and refurbished, and it is now a modern Mayfair family home, bright and airy inside and dressed with contemporary furniture. All that now remains to remind visitors of Catherine’s historic presence is the Blue Plaque on the house – which says that it was the home of Catherine Walters the last great Victorian courtesan.

Peter Wetherell, Founder & Chairman of Wetherell says: “Catherine Walters was the last great Victorian courtesan whose wealthy lovers included Royalty and aristocrats. The grand Blue Plaque townhouse at 15 South Street is where she lived for almost five decades, initially as a tenant, and from 1872 as the wealthy owner. If the walls of this Mayfair house could speak what tales of romance, high society scandal and wild parties it would tell. The house is fully modernised and is a lovely family home.”